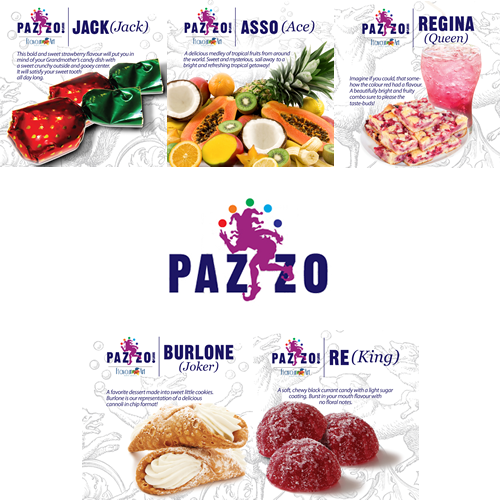 **Precursor:**  Despite being released for quite some time now, I did read a lot of the controversy around these flavors.  Some people thought they were great, others thought they bombed.    Enough time is passed, where I can't remember if FA hyped these heavily or not.  Regardless if they are just new flavor profiles, or almost one-shots, we'll see what's what here.

All testing done on a SteamCrave RDTA v.1 with dual 7 wrap Kanthal vertical coils, with fresh cotton and dry burned coils in between each tester.  All steeped 1+ week.

Although not new, and having been in circulation for a while, I was interested in @Mark_Turner's and @Dan_the_Man's testing of these.  @Mark_Turner's can be found here......

I decided to use the same recommended rates that Mark did, AND I also borrowed Mark's picture/review format, great idea @Mark_Turner.: 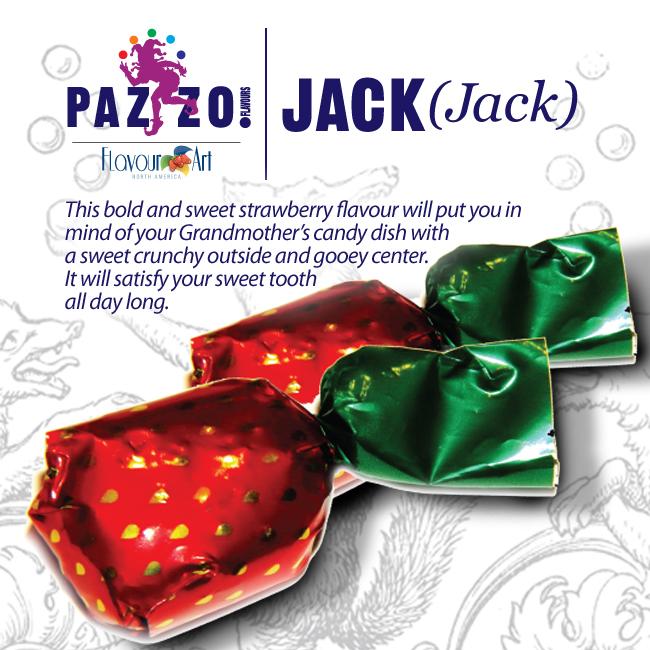 **Jack (Pazzo) (FA) 8% (7-16-21)  --**  FIRST one on deck, and it was directly billed as a candied Strawberry.  Now with all of the Strawberries out there, surely the thought on everyone's mind will be, "Do I need another one" ?  Well, let's just see.  I typically mix FA flavors much lower than 8%, but @Mark_Turner dialed in these testing weights, and that was where I settled.  At this testing weight, it actually tasted great, and with no signs of overflavoring.  A candied SB is about exactly what you got with this one, and FA did manage to almost capture the syrup that IS indeed in the candies depicted.  No crunch, but that was just marketing blah.  The SB itself shared some similarities with FA's Juicy Strawberry, but with some ripe notes, and the candied/syrup undertones.  Sweetness, was actually lower than expected, at about mid level.  It had a few sparkly high end notes, but the majority of this was in the mid region of a SB.  The overall experience was a good, red strawberry, with a sprinkling of bright top notes, and a super present mid body, red strawberry, that finished with a convincing candied, almost syrupy note.  Nothing out of place, could maybe stand to be a little punchier on the high end, and a smidge more presence.  As it stood, not sure if it would be a MUST have, but it was a fairly unique candied/syrupy SB, that you may not have in your current stash.  Felt fairly good @ **7.2/10**.

**Joker (Pazzo) (FA) 6% (7-18-21)**  --  "Damn, ..... that's good", were my FIRST thoughts on this one, and throughout the test, that hasn't changed.  Ok, the MFG description of this one is a little vague, "in chip format" ??   Wha ??  Ok, first off, I think it's safe to say FA's Zeppola IS in here, BUT, there's more.  At 6% this was slamming good, rich, delicious, full, and just didn't leave you wanting in any way shape or form.  The pastry shell/ cannoli was there, and there was a creamy undertone that was fairly relaxed in the overall mix, and it almost had a hint of cinnamon to it.  Now for some, this may appear as an unfinished flavor, because it wasn't pulled in any direction by a fruit profile, but that leaves YOU to push/pull it, any way you want.  A Lemon and/or Raspberry came right to mind as easy manipulations, but the skies the limit.  Beyond being a fantastic cannoli, it did have some cookie aspects to it, which made it even more interesting.  While getting NO chocolate from it, maybe a pairing of a cookie AND a cannoli perhaps....   Because it was billed as "cookies", and "in chip format" the lower cream in this one seemed accurate, and it was a really nice, rich flavor.  DAAP free ??  How did FA do it I wonder ??   All in, with the accurate cannoli, and cookie notes, with some cream and a tick above mid level sweet, I couldn't find anything off-putting or ill-fitting in this one.  If you are a cannoli fan, or have plans to become one, you could use this flavor.  Nicely done, accurate, rich, and full, and I'm right back to where I started, "Damn, ... that's good".  **9.9/10**. 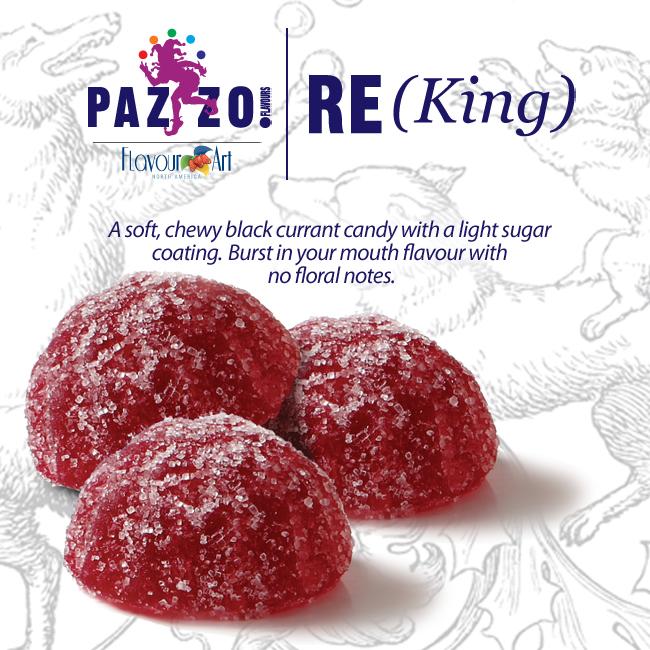 **King (Pazzo) (FA) 4% (7-17-21)**  --  @lukeloop commented on the recipe thread, that he really liked this one, and I KNEW I was going to be in for a treat, because he knows his flavors.  Boy was he right !!!!  Slamming good Black Currant that did almost have a chewy-ness to it, AND, a sugar coating, JUST like FA claimed.  I've used FA's Back Currant for years, but have never solo'd it, but I strongly suspect it is in here.  Now this wasn't as simple as pairing up some FA Black Currant, and FA Candy Jammy Wizard, but if you can conceptualize that, you're in the ballpark.  At 4% it was fully present, rich, dark, but with an almost red note lingering in the background.  The definite candy-ness of this one was only an accent, and in no way interfered with the delicious black currant.  Just below mid level sweet, and with just enough tart-ness to really make it believable.  Let's say if you love Black Currants, you WILL love this one, and vice versa.  As per the MFG's description, nothing floral in this one, just a really pure, accurate, and tasty BC.  The pairings with this one will be endless, darker fruits (and some others), custards, yogurts, etc.  If you notice in FA's product shot, the candy is red, and there IS a distinct red-ness in here, that defied identification, possibly a red currant, the candy chew profile perhaps.  I think it's safe to say this one's a keeper.  I looked long and hard throughout two tanks to try and find faults with this one, and could not.  Easily a **9.8/10**. 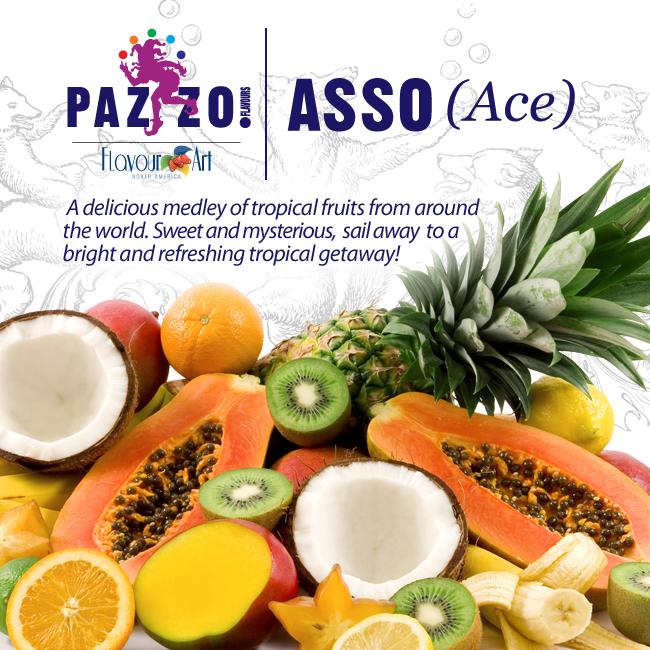 **Ace (Pazzo) (FA) 5% (7-25-21)**  --  With the last one in this sereis, I was mystified by the "Sweet and Mysterious"-ness of this one.  I had to finish the entire tester, before I could render a decision.  It was a very interesting paring, but not sure if it was for my tastes.  At best, it seemed more like a mashup than a finished flavor or one-shot.  Starting out with the positives, you got a healthy does of coconut, citrus, and kiwi, with perhaps a light spattering of papaya in the background.  Now at face value, all of those sound pretty good together, but after really getting into this one, I wasn't so sure.  As a lover of both Kiwi and Coconut, I can safely say I love each of them, but apparently NOT at the same time.  The mix did present as fairly tropical, tasted accurate to FA's claims, and nothing overtly felt artificial, and all of the flavors came across as natural.  As always guys and gals, YOUR taste is what matters with flavors, and I can only advise on my tastes/palate.  For my tastes, I just couldn't get behind the sum total of parts here, despite the individual notes being very good.  The final take-away would be a great coconut, citrus, and kiwi, that was partially creamy, probably due to the coconut, that was about mid level sweet.  It might not be for me, but it COULD be for you.  Finalizing this FA Pazzo run with this one, and for my tastes, felt pretty solid at **6/10**. 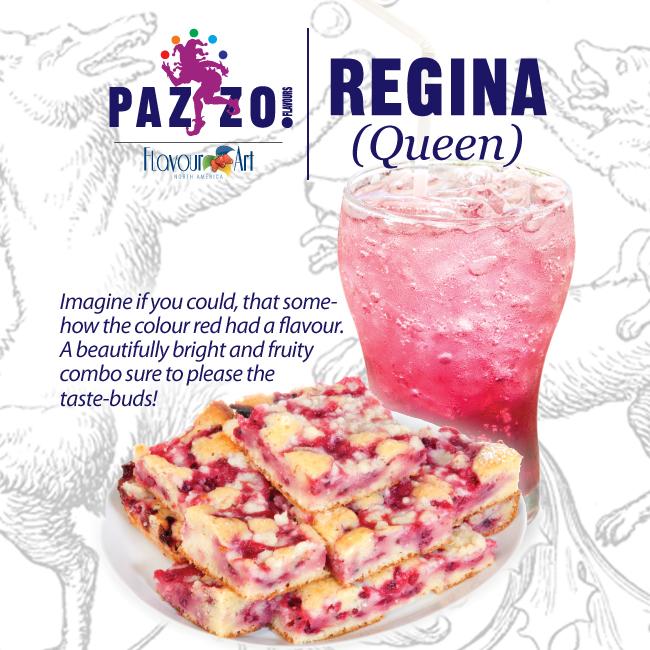 **Queen (Pazzo) (FA) 7% (7-17-21)**  --  I love when I get a flavor that breaks new ground, and that I've never tasted before.  This one was one of those.  At 7% I got nothing off-putting or chemical from it, and "Red", "Bright, and Fruity" seemed about accurate.  Quite an interesting medley here, and it was hard to nail down.  Despite def. conveying a "red" fruit flavor, I could detect, red cherry, cranberry, apple, and maybe a raspberry.  All of the different notes were evenly blended, with probably the cherry landing on top.  Nothing medicinal, or soapy, and despite it not being a singular flavor, it worked as a medley convincingly.  Sweetness was just below mid level, and it was tempered by a nice tartness that made it more interesting.  True to a medley, the flavors swirled around, and tried to defy detection, and sometimes you got more or less of one or another.  It reminded me somewhat of RFSC's Yumberry, not because of it's individual notes, but as a sum total OF it's notes, and how it was unique, and unlike anything else I've tried.  Although it wasn't a specific "cherry" it did have some good, almost red-ish cherry notes that were dominant.  For an interestingly unique "red" fruit medley, this one worked pretty good, with no real takedowns, and my original note detection didn't waiver throughout the test, with Red Cherry, Cranberry, Apple, and possibly a Raspberry (light) thrown in.  Interestingly placed @ **8.5/10**.