During this crazy time we're going through, with all the hype, excitement, and anguish over the Coronavirus, it seemed like a perfect time to SLOW things down a bit, and settle in for a bit, and get up some reviews of some really kick ass smelling one shots.  Huge thanks out to @zippy for hitting me up, and sending me out some samples for this review from her site.

Now normally when you purchase one shots they are typically from one mixer, one flavor brand or house, but after checking out her website, I was VERY excited to see not only that they offered mixes from TEN mixers, but our one and only @woftam was in the list. 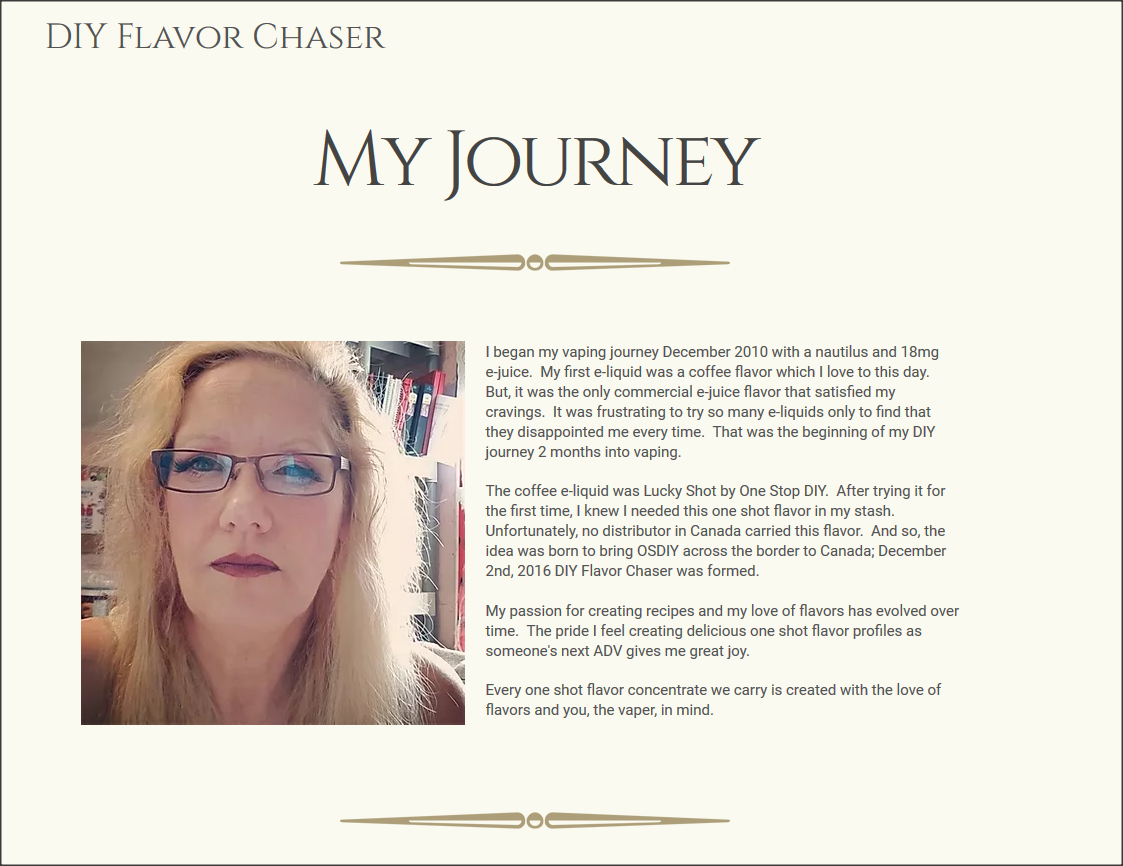 DIY Flavor Chaser brings together some of the top mixers in the industry to create unique concentrated one shot blends for you to enjoy.​

We have many one shot concentrates to choose from including fruits, deserts, bakeries, and custards.​

Having received 7 one shots to test, and having steeped them ALMOST long enough, sneaking sneak sniffs of them, I'm VERY excited to try these out, and I was picking up on some really good smells. 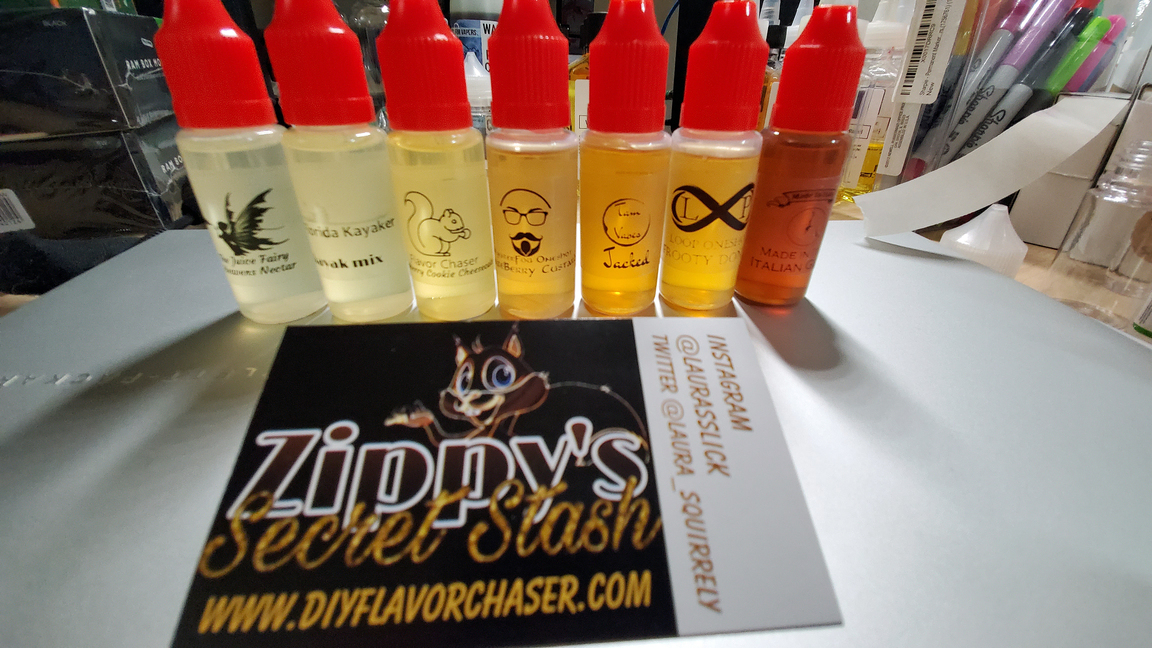 Zippy was not only kind enough to supply 7 testers, but also included mixing percentages, and steep times.  The steep time is ALMOST done, but I wanted to get this thread started.  Her website is cleanly laid out, with each mixers own area, all the available recipes, mixing percentages, steep times, and total yield for the one shots purchased sizes.  Take some time to peek around her site, including the plethora of links for each mixer that are included.

ALL testing done on a SteamCrave RDTA v.1 with dual vertical, 7 wrap, single wire Kanthal coils, with fresh cotton and burned coils before every test.  All were tested @ 3mg NIC, in a 70v/30p mix following the provided steeping times.

**Italian Gelato (Made In Italy) 17% (3-14-20)**  --  FIRST one on deck, and excited as hell to try these out, as @zippy currently has no less than TEN different mixers one shots available on her site.  I currently have a go to Caramel Macchiato and was curious to see how, or if this was comparable.  I don't know who the "Italian" is, but I think I need to meet him now, as this one was exceptionally delicious !!!  In a nutshell this is an Espresso Gelato, but that really doesn't do it justice.  Being a big fan of FA's Espresso, I had assumed that would be here, but curiously not.  The coffee/espresso's presented as more complex than originally assumed, and it seamlessly layered into the creamy gelato base.  Gelato is simply Italian ice cream, but it differs from American ice cream (basically) by using more milk, less cream, little to no egg at times, and is much denser.   This mix perfectly captured that aspect of it, and I got some hints of hazelnut in there, which only worked to deepen this mix even further.  Quite a lot going on here, and fairly complex.  Continued vaping just left me wanting more hehe.  The espresso/coffee although forward, didn't overshadow the creamy backend, which proved to be a skilled approach.  Mid level sweetness pushed this into an ADV category, the forward and rich espresso gave it the punch, and the entire mid to finish of the vape, the creamy sweet gelato finished it out.  You may not always be able to explain a "complex" mix, but you'll know it when you taste it, and this IS one of them.  It is interesting to vape, as the hard hitting espresso/coffee front end, never overshadows the creamy sweet gelato.  Very intriguing vape, and handily a **10/10**.
______________________________________________________________________________________

**Frooty Loop Donut (Luke Loop) 15% (3-15-20)**  --  Onboarding with number TWO in this series from @lukeloop.  What do we all (most of us) just HATE, every time we try out a new donut ??  Well, it's either PLAYDOH, or it's not even CLOSE to a donut, or at least those are MY fears.  Well, I've got grrrrrrreat news, as there was NO Playdoh in this one, AND, I got Donuts !!!!  That's already TWO major hurdles overcome, just out of the gate.  Regarding the donut (doughnut) I actually wish I could have had just a little bit MORE of it, BUT, even at the level it was at, I got quite a nice little serving up of a cakey donut that that layered in perfectly WITH the Frooty profiles in here.  Nothing greasy, or deep fried, which were two more plusses in my book, but a mid level cakey donut.  Onto the Frooty part.  Obviously Luke wasn't about to throw in any lemon pledgy-ness in here, and he didn't.  The Frooty (loops) part was actually very interesting, and I can't tell exactly how he did it, but it was a layered approach.  No off-putting lemon, yet still present, and maybe a smidge of lime, and I def. picked up on an orange push.  Not bad, not overbearing, but it seemed to really pull the froot loops into a nice even sled, that the donut was riding on.
Sweetness was higher, but nowhere close to commercial levels (as checked by lack of coil gunk), and it almost had that lip smacking effect, which again, was perfect for this recipe.  About the only thing that seemed it could be boosted might be the donut, just a smidge.  The donut seemed to do double duty here, first as the donut, and 2nd as almost a grain booster for the loops.  I think trying to do a donut that's perfect for EVERYONE is impossible, and this one was about as close as you could get, with only minor markoffs for almost enough donut.  One of the BEST looper-esq mixes I have ever had, and I've had a LOT**.  9.75/10**.
______________________________________________________________________________________


**Boozeberry Mash (Myster Fog) 15% (3-26-20)**  --  Seventh and final one shot in this series, and very fitting it was from one of our own, @MysterFog.  Now typically, I am NOT a huge fan of boozey vapes, as they never translate well for my tastes, so I wasn't sure about this one.  This one was a unique take on a Dark Berry medley, with some cream, and a booze kicker on the tail end.  It's literally that easy to explain.  Berries, Cream, Booze and in EXACTLY that order, as that's how the flavors present throughout the vape.  It takes a lot of skill to have flavors present like that, as opposed to a ALL at once mish-mosh.  The Dark Berries were nicely dark (duh), with just enough sweetness, some tarty punch, and sat on the front end.  The creaminess is what the berries led into for the middle of the vape, and although I think I can pick out maybe one cream, really worked as a neutral cream to soften some of the sharpness of the berries, and provide an even carrier.  Finishing it off, and very NOT heavy handedly, was the bourbon booze, but only on the very tail end of the vape.  I am VERY happy that the bourbon was toned low in the mix, and it worked as an accent, not a blisteringly obvious main note, which has been my problem with most booze vapes.  As a whole, this "trio" if you will, works perfectly.  All three main elements were present, but each in their own space, without any one overshadowing the other two.  Skillfully done, and for a guy who really doesn't LIKE booze vapes, it surprised me that I did like this one.  ADV material for sure, and will appeal to a lot of vapers.  I know I will finish the tester on this one.  If you're a fan of dark berries, cream, with a booze kicker, you'll want to try this one.  **9.85/10**.
______________________________________________________________________________________

>The tender and sweet flesh of a succulent ripe Aussie mango with a hint of icecream. D’Mango Unchained will be the last Mango you will ever need to buy.

I was most curious because it said with a “hint” of ice cream, so it wasn’t supposed to be a full on Mango Ice Cream, and that interested me. Alright, this one did present as a delectable, juicy Mango, that almost had slgiht apricot nuances, that almost enveloped you IN the Mango. Quite an experience, as I’m not typically a fruit vaper, so I had expected maybe a 2 dimensional Mango, but this was def. more 3 dimensional. Ripe and fleshy were the two main aspects that struck me, but there WAS a rather interesting smooth, almost ice-creamy finish that carried it out nicely at the end. It wasn’t overwhelming, or overly creamy, and surprisingly it didn’t temper the initial onrush of the Mango, nor mute it, but gently kissed it, on the way out the door. A very nice touch. The Mango itself was bright, punchy, and very natural tasting, with a very nice helping of it. At 15% it felt nice and full, with no offputing notes, nor any overt artificial qualities. The slight ice-creamy finish was a very nice twist, as it really only revealed itself at the very end, and kept it quite interesting. A very solid, and interesting take on the Mango, and more dimensional than I had expected. Nicely done, and for you fruit or Mango lovers, this one should be able to take care of that for you. 9.85/10.

Onto the 2nd one from @woftam, Custard Slut.

> Custard Slut is a decedant creamy vanilla custard with a nice European eggy feel. Those that say custard isn't meant to be vaped on its own haven't vaped this.

Let's get the whole, "Yeah, but does it suck or what" ? out of the way, hehe.  NO, it doesn't suck, and it IS rather Sluttish if I do say so myself.  Quite slutty now that I think about it.  Now I don't 100% know what a "European eggy feel" is, but I think I know what he was getting at.  This one proved to be a fairly complex Custard, that left you rather guessing exactly WHAT was going on, and that's nice for a change with a Custard, because most times, you just get what you get, and then more of the same.   Creamy, and smooth were on deck with this one, and yes, some egg, but not in an overbearing way, but almost always present JUST enough.  At times, I could swear I was almost getting a hint of banana, or coconut, but that was part of the mystery.  I think the flavors were so expertly paired and blended, that it did shift and sway around during the test, which just really kept it interesting.  At 15% it was nicely present, but not overbearing, which can be easy to do with custards.  Smooth, and about mid level sweet or a tick higher, nothing felt out of place, except for an exact descriptive profile.  Throughout two testers I really enjoyed this one, and the fact that it did defy exactly revealing itself, did keep it interesting, and non-fatiguing.  It was light enough to never wear out it's welcome, but heavy enough to hold your interest.  It was hard to nit pick this one, and about the only thing would have been a slight astringent after note.  This easily could be pushed out by adding a dash of sweetener, but Simon chose NOT to, and you've got to love that.  If you want it sweeter, you could add it, but it wasn't forced on you.  In closing, another great showing from the Myster Fog line, in the form of a slightly eggy custard, that was smooth, and creamy, with a complexity that kept you guessing, with maybe hints of coconut and banana.  I can't go lower than **9.9/10** on this one.


@whthek did a great job of reviewing this one as well.. 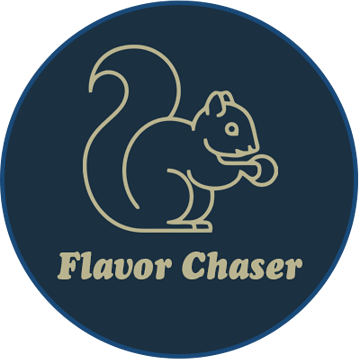